ATTENTION ALL QANONS: "IT'S HAPPENING"

Military takedowns and arrests begin this weekend and will continue forward for the next 13 days/ nights/ Some international raids have already started. Italy has been found complicit in our election fraud.

Everyone will be getting emergency SOS alerts on their phones, TVs, radios & the Internet. It will override all other broadcasts and could last for several hours at a time. Do not be scare of what's coming as it is for the safety of our nation for this to unfold.

DO NOT travel to any large cities (especially Philadelphia) for the rest of the month. Military operations will be taking place in many of the major corrupt cities. People will start rioting once this intel breaks thinking Trump is a military dictator.

He only has 13 days to put this dog down.

The implementation after the raid on the Capitol and was marked by Trump's broadcast to the people to disband and return home. This broadcast wound up being blocked, for the most part, by the media. Nevertheless, his address fulfilled the requirement to initiate the Act.

Marines and National Guard troops are being moved as needed for the riots that will start after the national release of the intel. The intel will be dropped for everyone to see and hear in loops that will be several hours long.

The system was just checked by the FCC a few days ago alerting ALL media that they cannot block the flow of intel under federal regs. Trump will be moved continuously like a chess piece from now until the 20th in order to avoid any retaliation against him and his family.

Trump had to exhaust ALL other means legally before this operation could commence. He gave everyone a fair chance to come clean and they refused. His press release of a "smooth transition" did not include the word "concede" as he has no plans to do so. Rather, there will be a smooth transition of power to his new cabinet, staff, and Vice President, General Flynn.

The rally in DC was an awesome event! The raids on the Capitol all started with BLM and Antifa members (many from the Philly area) and included Capitol police or those posing as Capitol police. Every day, new info is pouring forth to support this. They opened up the barricades and doors to the Capitol and let them in.

Also, I got an update on the Capitol breech.

It appears there were some Special Ops members dressed as Trump supporters who went in with the crow of protesters that were able to secure 20+ laptops w/ hard drives with data regarding sex trafficking intel from both, Pelosi, and Schumer's offices. 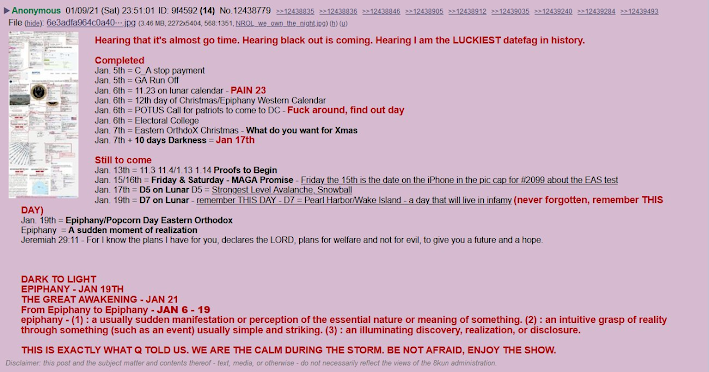 SUPPORT GEORGE RADIO with a 1 time or recurring donation. Thank you.
at January 09, 2021